WATCH OUT...THERE'S A SCOUT ABOUT! 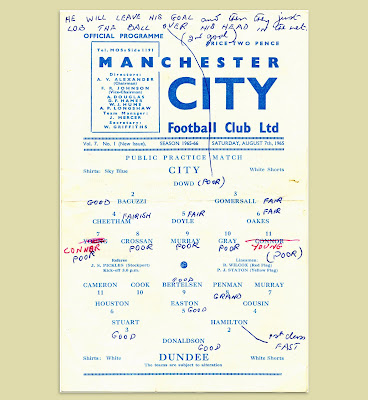 This programme once belonged to a football scout, hence all the scribbling, which I'll get back to in a moment.
The game was a friendly at Maine Road, Manchester City v Dundee FC, on 7th August 1965, Dundee winning 2-1. I refer to it as a friendly but on the programme it actually says "Public Practice Match". 10,000 crowd.
Now to the scouts notes.
What makes it amusing is that although he was there to "watch" City, he ended up giving Dundee all the praise. He assessed all 11 of City's players and were summed up as follows - 6 players POOR - 3 were FAIR, 1 FAIRISH and 1 was GOOD.
While he was at it he jotted down observations on 6 of Dundee's players - 4 were GOOD, 1 was GRAND (Penman) and 1 was 1st CLASS/FAST (Hamilton).
He also gives a description of Dundee's 2d goal, from the keepers perspective, and he writes - "He will leave the goal and then they just lob the ball over his head in the net".
So there you have it. Even when it is only a friendly, it's best you try make a game of it because you never know who may be watching!

Some of the City team were to become stalwarts. Mike Doyle played into the 70's, as did Alan Oakes who was capped for England. Is the left winger Neil Young? If it is, then I think he scored a winning goal in a cup final. He died early in 2011 and City wore their black and red striped shirt in tribute to him.