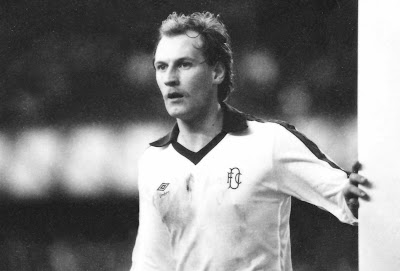 George McGeachie guarding the post in a game against Rangers on 5th Feb 1983, a match that ended in a 1-1 draw. This league game was at Ibrox, but amazingly, it only attracted a 7,000 crowd.
There was also another George McGeachie who played for DFC in the early 60's but I haven't been able to discover if they are related. If anyone knows, drop it in the comments.

Thanks for that...I thought they may be related but couldn't track down any info on that. Now we know.

Took my Girlfriend at the time(Now my Wife) to Zico's (George)Testimonial V. Liverpool at Dens she English and a Big Liverpool fan was over the moon to see Dalglish that day.

George's Uncle. Uncle is on the Munros list. Both played for Dundee, but obviously not at the same time.

George alive and kicking. Incidentally, the George McGeachie that comes up in an ICI photo from Dumfries and Galloway is the same Uncle of George.