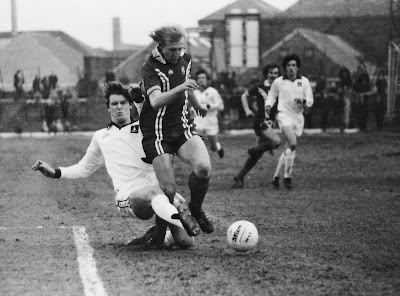 Jim Shirra in the thick of the action during a game against Falkirk in a Scottish Cup tie at Dens on 25th Feb 1979. A Pirie penalty sealed a 1-0 victory for the Dee on this occasion.
Shirra was with DFC from 1977 to 1981 and played a total of 111 full matches. He usually managed to bang in around half a dozen goals per season.

Jim Shirra will always be remembered for being a part of the Gordon Strachan transfer deal, and for that reason alone, would have had to have been pretty exceptional to have won over the Dee support. Unfortunately he wasn`t, and so was never really that popular, which was a shame because he was a real committed player who gave his all. He was a constant reminder of how much we were ripped off.

Wonder where they are all now. Shirra, Pirie, Phillips etc