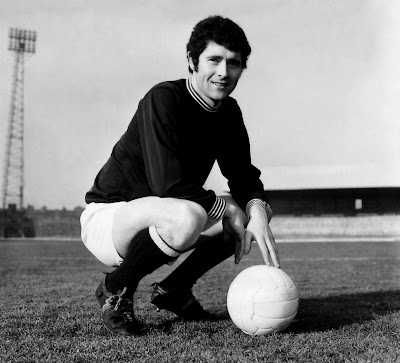 Steve Murray hooked up with Dundee at the start of the 1963/64 season.
First began playing as a right sided winger, but after a couple of years was placed in the right-half position and for the remainder of his time at the club, claimed the #4 shirt.
He managed to grab 21 goals, the majority of which were scored during his early years when playing up front.
He played a total of 240 full games for the Dee - 1963 to 1970.
The photo was taken at the tail end of the 60's.
Posted by RETRO DUNDEE at 01:23

From memory (not checked in any of Norrie Price's books),maybe November 1969,we beat Clyde 3.0, Stevie scored 2 and it looked like he was wearing baseball boots.Not long after that he left for Aberdeen.
He was also a great artist doing some pretty neat caricatures of fellow players.
Not only good at drawing but also on the numbers front-did he not have a managerial position with TSB in Strathmartine Road,which he gave up to take up a short lived post as a coach at Tannadice,that resulted in him taking wee Jim to court and a sheriff making some pretty damning comments about McLean.

Liked Stevie Murray, he played attacking midfield role more in what we now expect from this role. Got a autograph of Stevie when he played for the Hoops against Dundee in final