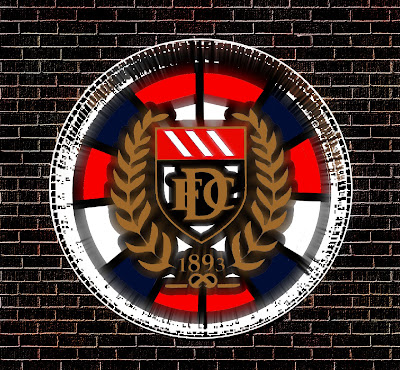 Time to shut shop now for a mid winter break.
All going well, the Dark Blues will still be on top, or even further ahead, when I get back to the Shrine in the New Year.
Anyone new to the Shrine can catch up with all the past items by clicking on the dates in the Archive down the right-hand side of the layout. They will open up to display previous posts.
So to wish you all a Merry Christmas, here below, is a rare recording of a tune you will all recognise, taken on location at a church somewhere in Dundee.
Well the do say football is a religion! 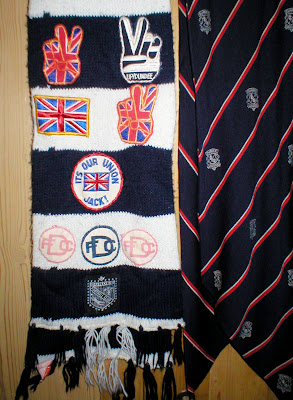 You will have spotted the scarf the Major was wearing in the DJ photo a few posts ago. Well here is that very one, in all it's 70's glory!
You can click the image to enlarge it if you want to zoom in to view the period patches.
The scarf on the right is a genuine original from the 60's, and has to be my all time favourite.
An iconic classic!
Big THANKS to Jock. 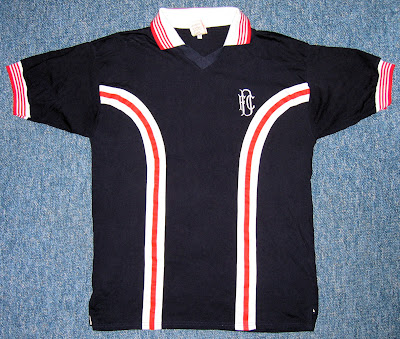 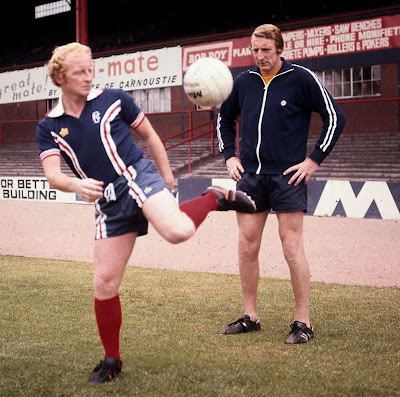 This is the short sleeved version of Dundee's braces shirt the team wore in the 1976 - 79 era. Still looking pretty smart too!
Admiral made the original official strip back in the day, but you can still grab a replica top from retro sportswear outlets these days.
The photo underneath it is Jimmy Johnstone wearing the full kit in 1977.
Jinky was at the tale end of his career when he signed for DFC, and consequently only managed to play 2 full games in the Dee colours. I, however, saw him play a couple of extra games, because I used to go watch the reserves play too in this era, and I can tell you he actually played better in the reserves than he did in the big team. Not the wee wizard he once was, but still managing to run rings 'round the youngsters at times.
Thanks to JF & GK. 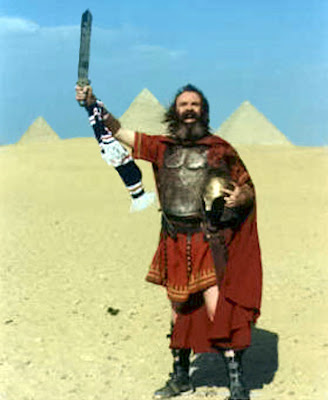 Here's Jock flaunting a Dee scarf in the middle of the desert in Egypt.
The date is 26th November 1995, the day of the Scottish League Cup final v Aberdeen.
Work commitments meant that Jock couldn't get through to Hampden for the game, so when he was playing Hannibal for an American TV documentary about ancient civilisations, he managed to brandish the blue & white club colours while having a bit of fun during an outtake sequence, just to remind everyone his thoughts were elsewhere!!
Big thanks to Jock.
Posted by RETRO DUNDEE at 02:05 No comments:

JOCK FERGUSON AKA ROBERT THE BRUCE 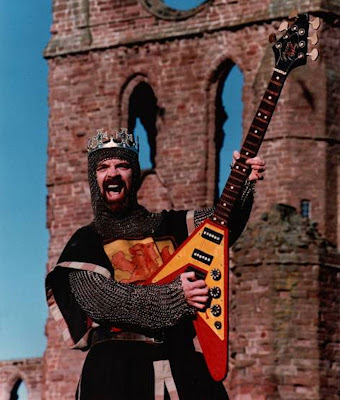 Jock has been known to enjoy a bit of dressing up now and then, sometimes for fun, but mostly to accompany his ideas, and here he is here as Robert The Bruce, a character who has performed at Dens Park.
One of the times Bruce entertained the Dens crowd was an appearance at a Dundee v Rangers game. He, along with the Dee-Lites, did a song called "The Man Who Would Be Disco King", but unfortunately, some members of the crowd didn't appreciate the free entertainment that was laid on and expressed themselves by pelting them with coins!
Bruce also appeared on the Dens pitch at a game against Hamilton. On this occasion though it was to show off his football skills! All that got hit this time was the back of the net!!

Posted by RETRO DUNDEE at 01:18 No comments: 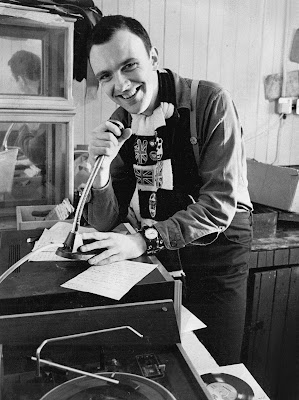 This candid shot of Jock Ferguson's alter ego, Major Longhorn, was taken in the hi-tech surroundings of the DJ room at Dens in 1979.
He was the DJ for 2 full seasons, but also did the odd stint up to around 1990.
There was a noticeable change in the music blasting out of the tannoy at Dens when the Major took charge, the most obvious one being introducing the sounds of punk & new wave, with bands such as The Clash, The Cure & The Damned, a selection that often lead to complaints for being too loud! There was one occasion when a fan heard The Dead Kennedy's booming from Dens, when he was halfway down the Hilltown!
He would also spin a quirkier set from time to time with the likes of Nellie The Elephant, The Laughing Policeman and Jimmy Shand, an act who always got the crowd in the stand stomping their feet!
We do, however, have the Major to thank for being the chap who revived the Hector Nicol gem from 1962, "The Dundee Song", the scratchy old record played when the team run onto the pitch.
Other Dens duties included reading out the half time scores, and on the occasions when United were losing, he would keep that till last, giving it a big build up!
He also had a go at doing the commentary at Dens when there was an under 16 World Cup tie being played, and was struggling to pronounce impossible Chinese names!!
Other Major output was as contributor to the match day programmes, writing his own columns, accompanied at times with a cartoon or two.
A few years later, Jock helped put together the DFC cd "It's my Dundee", featuring the updated version of "Johnnie Scobie", another tune that still gets belted out at Dens.
Finally, some of you may recall the Dee related tales of Bandy Conacher on the net, well yep, that was also one of Jocks creations.
Anyway, that was just a brief introduction to Jock and the Major, there will be more to follow.
Thanks to Jock. 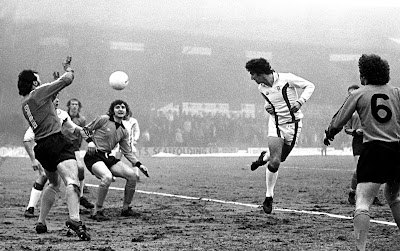 Centre Forward, Billy Pirie, was something of a goal machine for Dundee.
In the 4 seasons he was at Dens - 1976 to 1980 - he scored an impressive 106 goals in 137 appearances, and was the Dees top scorer 3 years on the trot!
The picture is of Billy, typically going for goal, in a game against East Fife in 76/77, his debut season which had him bang in 44 in total!
Photo by DC Thomson.
Thanks to GK.
Posted by RETRO DUNDEE at 08:12 5 comments: 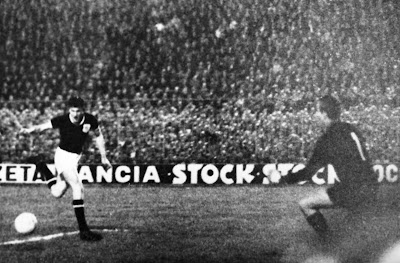 This is the magic moment Dundee's Alan Cousin finds the back of the net against AC Milan in the semi final of the European Cup at the San Siro, in front of 78,000.
April 1963.
Thanks to GK 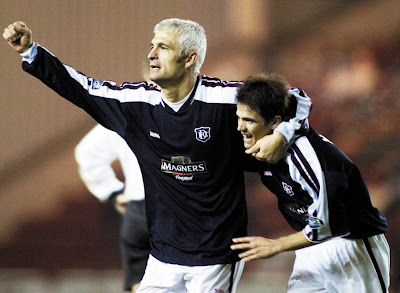 Although Fabrizio Ravanelli only played 5 full games for Dundee in the 2003/04 season, he managed to grab 3 goals, all of which were against Clyde in a League Cup game that took place on 29th October 2003. The match ended 5-2, with Novo & Wilkie scoring the other 2.
The above photo of Rav & Novo was taken at that very match.
Thanks to GK.
Posted by RETRO DUNDEE at 01:36 1 comment: 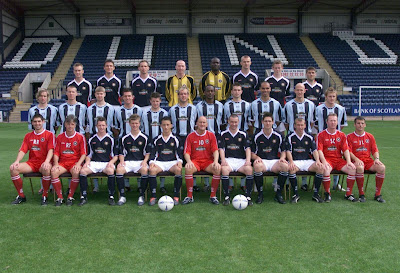 The official DFC team photo for the 2004/05 season.
It's so formal and symmetrical, even the 2 balls have been posed to match exactly!!
Photo by DC Thomson.
Posted by RETRO DUNDEE at 01:19 1 comment: