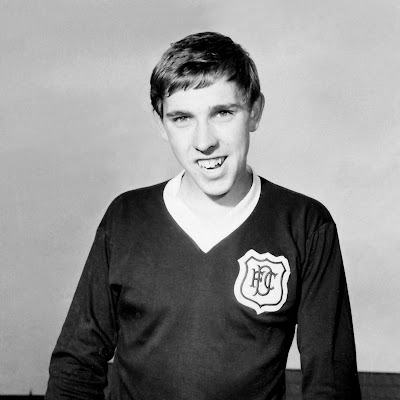 You can tell by the strip and his rather youthful looks, that this picture of George Stewart was taken in the mid 60's - very early on in his long career at Dens.
Although he joined the Dee in 1964, he didn't make his debut until the 1966/67 season, and then went on to play a total of 291 full games for the club, all the way through till 1976, which is pretty good going.
A typical centre half really, dependable, got stuck in, and being of tall build he'd often use his height advantage for corners and free kicks, hitting the back of the net on a few occasions too.
In fact, one of his rare goals was captured on telly, here it is below.
A 2-1 Dee victory away at Tynecastle, with big Dode getting on the end of a Biffo free kick - December 1972. 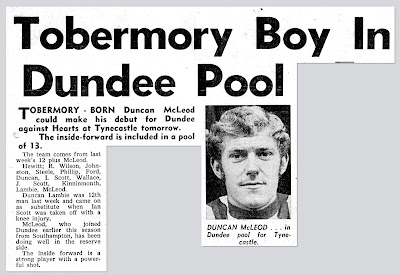 Here's a DFC player to test your memory cells - striker, Duncan McLeod.
This cutting, dated Friday 14th January 1972, mentions the possibility of McLeod making his Dundee debut that Saturday as he was included in the pool to play Hearts at Tyncastle the next day.
It wasn't to be however, in fact McLeod only played one full game for the club and that was the following season when he took part in the Dees away game against Norwich in the Texaco Cup in September 72. So at the end of the day, there can't have been many Dee fans who actually saw him play for the dark blues!
Anyone go to Norwich?
Incidentally, the game at Tyncastle - we won it 5-2!
Posted by RETRO DUNDEE at 02:20 4 comments: