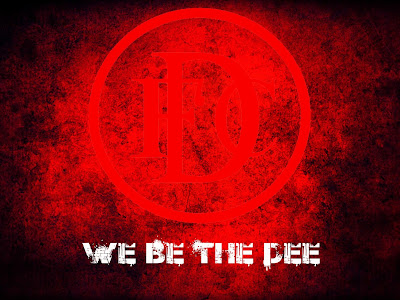 Here's a tune by Blue Bones Jones called "We Be The Dee (1893)".
BBJ says about it ..."I wanted to get away from the cliched kind of football songs that usually contain extremely corny sing-a-long choruses and tiresome anthem styled music. This track, although it has a catchy tune and is upbeat, is a bit more subtle, and unusually for a football record, can be defined as a leftfield electronic groove. A sound that breaks new ground but still with its content kept rooted in the past. Music always keeps up with the times - and the club, in 2013 has adapted to changes too, but they continue to move onward along the tracks that were laid down in 1893."
Blue Bones Jones has a strong link with another Dundee tribe of music makers, Calabar Cult, who collaborated with BBJ on this track.
The visuals too (made by Shangeau) are not your usual kind of football video. No players, no action, no stadium, just the use of the rarely seen 1972 shirt crest set in a variety of illuminated backdrops.
You can grab free copies of both the mp3 and video.
Here is the link http://sdrv.ms/1dxXmdb
The mp3 is around 8MB and the large hi-res video is 110MB.
It's just a low-res one on display here below which is why some scenes are a bit blocky, but the large version is perfect to view full screen.
Something a bit different anyway.