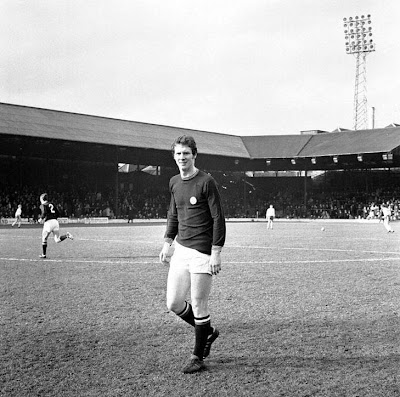 Just a reminder of the physical stature of Jim Steele. Here he is getting ready for the clash with Hearts at Tynecastle in 1971, a game that ended 0-0.
Photo by the Scotsman.

Voted No.35 in the top 50 greatest Southampton players

"Six foot two, eyes of blue, Jimmy Steele is after you...." Aaaah, they don't write chants like that any more. The Scottish centre half was a permanent fixture in the Saints side, except when he was banned. Which, to be fair, was often. But you don't get to be man of the match in an FA Cup Final unless you also have timing as well as tough tackling. Steele was sent off in a Cup rematch against Man United the following season and left Saints shortly after. He now runs a pub in Gloucestershire but is still seen at Southampton as a match-day host - and is still talking the game brilliantly.

I knew Jim Steele when he was in the United States. Hope he is doing well. Could someone please leave a comment letting me know how he is doing?

Big Jim Steele was the best crosser of a winger I ever saw they talk about hard men Big Jim was up their with the best of them. Away the DEE